After talking and listening to my colleagues and friends who are still employed, I have the urge to try to quantify the utility of administrative meetings to scientific progress. I begin with a very simple model of what this relationship might look like.

It is far from clear which model is appropriate for an ecological scientific team and more research is needed on this topic. Many scientists struggling with measurements and data collection are possibly attracted to the Pessimistic Model because time is the limiting element in their lives and both data and results are what limit progress. On the other hand, scientific administrators are possibly drawn to the Optimistic Model if they believe that meetings are the most important point of scientific progress and time is not the limiting factor, or perhaps they are drawn to the Neutral Model if they assume their scientists will work diligently and achieve the same goals no matter how many meetings are scheduled.

I hesitate to present this model given that the underlying mathematics are relatively simple, plus there are probably more business textbooks that make a detailed analysis of this issue than there are words in this blog. In a more realistic framework, we may have a peaked curve that indicate many meetings early in a project and fewer meetings once things are moving forward smoothly. There is going to be no magic numbers here, and the only purpose of this brief discussion is to think about how much you need to meet to define and deliver a set of objectives for a scientific question.

All my speculations above arose from an old paper (Moss 1978) illustrating these same general principles. Parkinson (1958) framed the law that “Work Expands To Fill The Time Available For Its Completion” and showed one consequence of this was that the fraction of administrators within a public organisation tends to increase irrespective of the amount of external scientific work done by that organisation. Moss (1978) produced these data to illustrate this law for British science data from 1976-77, illustrated in this graph:

After I retired, I was privileged to be able to team-teach a short course in pest management at the International Rice Research Institute at Los Baños in the Philippines. The course was run by Grant Singleton and David Johnson and was taught every second or third year to about 30 young scientists from Southeast Asia who were mostly concerned about rice cultivation, rodent pests and weeds in rice. The course was an eye-opener for me both to the world of rice, the extensive and excellent research going on at IRRI on rice cultivation, and the very bright and enthusiastic young scientists from Southeast Asia, many of which had never traveled outside their home country before taking this course.

Why should we worry about rice? Rice is the staple food of at least 4 billion people on Earth. That is one clear message that defines its importance for humans. When I was revising my ecology textbook some years ago, one of the reviewers complained about all the material on rice in my book and asked why I did not use more North American crops for examples. We should not be this short-sighted. Population growth and food security are now front-page issues on every continent, and scientists at IRRI (established in 1960 and now with more than 1000 staff) continue to do research with the goal of improving the yield of rice varieties and the livelihood of rice farmers around the world. Much of IRRI’s research has involved developing and improving varieties of rice to make them more productive, and our ecological goal in teaching about the ecology of pest management was to suggest ways of reducing losses to rice pests that could range from 15-40% of the total crop (Htwe et al. 2019). But as IRRI scientists realized long ago, the quality of the rice crop is as important as the quantity.

Whither rice cultivation in a world of climate change? Changing temperature and rainfall are key concerns for all crops but nutritional value is another. Zhu et al. (2018) have reviewed the possible effects of rising CO2 on the nutritional value of rice. The answer is not good. At many different sites Zhu et al. (2018) grew 18 varieties of rice in FACE (Free Air CO2 Enriched) experiments and measured the changes in the quality of the rice in protein and vitamin content. Current levels of CO2 are about 410 ppm, and in their experiments, they increased CO2 to 570-590 ppm (the level expected within this century). One graph illustrates their main results:

About 600 million people, primarily in Southeast Asia, consume ≥50% of their per capita dietary energy and/or protein directly from rice (Smith and Myers 2019). The concern is that even small losses of these vitamins in rice caused by higher CO2 could have potentially large impacts on global health, placing tens of millions of people at new risk of deficiencies in one or more of these nutrients. Singer et al. (2019) review the main biotechnological research strategies that are currently underway with the aim of improving photosynthetic efficiency and biomass production/yields in the context of a future of rising CO2. Rising temperatures change the developmental processes of plants and the key for crops is artificial selection for varieties more adapted to warm temperature but for wild plants only relatively slow natural selection is available to achieve the same goals, which may well increase the rate of extinction of our native plants without some intervention (Lippmann et al. 2019).

Another issue that is behind rice cultivation as well as all modern agriculture is soil nutrient conservation. At IRRI they grew several rice varieties for demonstration purposes, cultivating them on rich volcanic soils. One of their treatment plots was a control – no fertilizers were added, and the same unchanged rice variety was used each year. One of the results of these demonstration plots was that the control plot, which we had assumed should be stable and sustainable, was declining in rice production per ha at a rate of 1-2% per year. During the 38-year study (1968-2005) climate was changing, CO2 was increasing, air pollution may have changed, so that soil productivity is only one possible explanation of these declining rice yields. Slow changes in soil fertility are difficult to track and yet vitally important in the long run if we are to have sustainable agriculture under climate change and human population growth. Now it is clear that we not only need to maintain soil fertility in agricultural soils for high productivity but also need to be concerned about high quality of the grains and vegetables being produced in a climate-changing world. We do not live in a constant environment and can no longer assume stability in the quality of our food supplies.

When I give a general lecture now, I typically have to inform the audience that I am talking about scientific ecology not political ecology. What is the difference? Scientific ecology is classical boring science, stating hypotheses, doing experiments or observations to gather the data, testing the idea, and accepting or rejecting it, outlined clearly in many papers (Platt 1963, Wolff and Krebs (2008), and illustrated in this diagram: 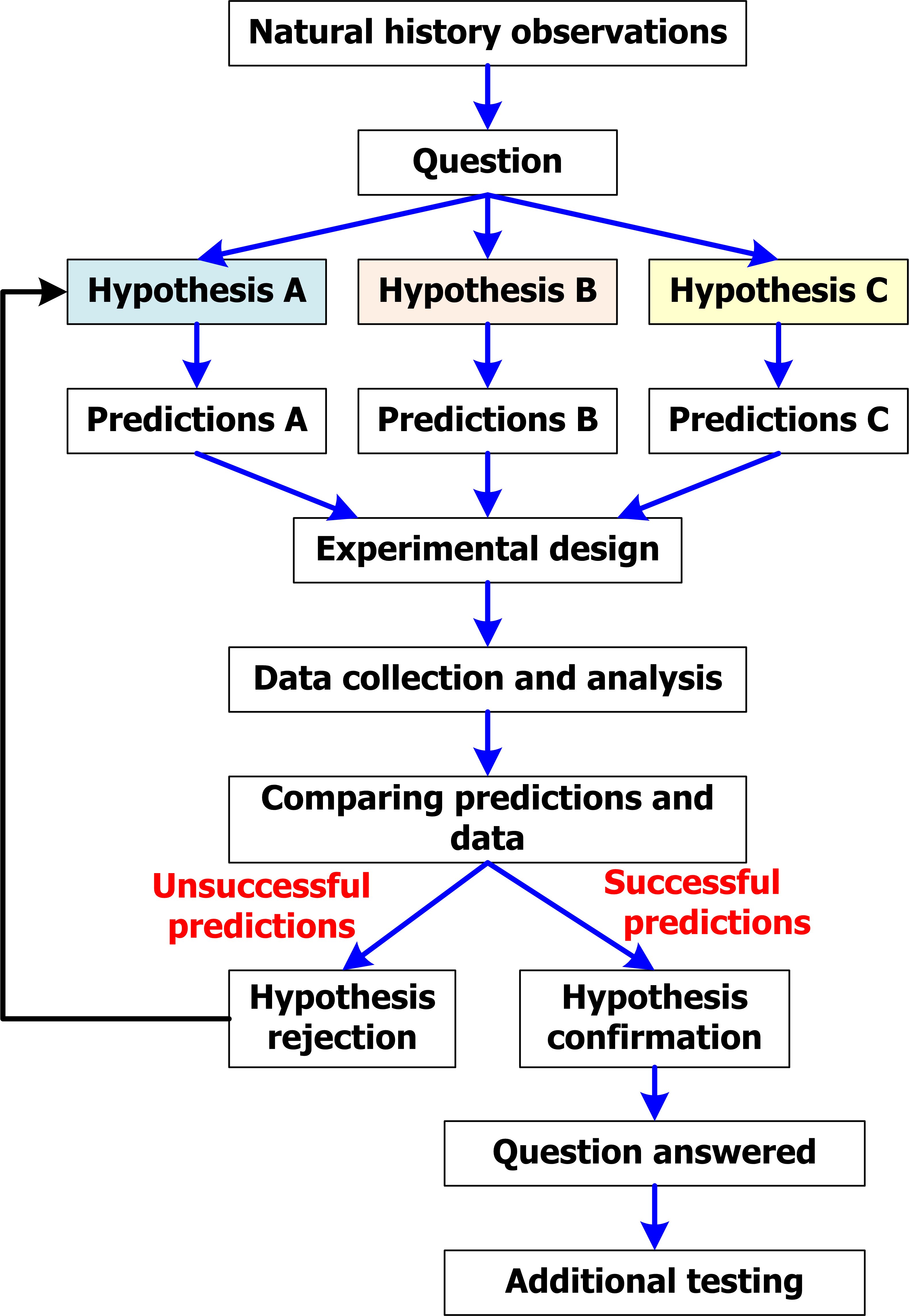 Scientific ecology is clearly out-of-date, and no longer ‘cool’ when compared to the new political ecology.

Political ecology is a curious mix of traditional ecology added to the advocacy issue of protecting biodiversity. Political ecology is aimed at convincing society in general and politicians in particular to protect the Earth’s biodiversity. This is a noble cause, and my complaint is only that when we advocate and use scientific ecology in pursuit of a political agenda we should be scientifically rigorous. Yet much of biodiversity science is a mix of belief and evidence, with unsuitable evidence used in support of what is a noble belief. If we believe that the end justifies the means, we would be happy with this. But I am not.

One example will illustrate my frustration with political ecology. Dirzo et al. (2014) in a recent Science paper give an illustration of the effects of removing large animals from an ecosystem. In their Figure 4, page 404, a set of 4 graphs purport to show experimentally what happens when you remove large wildlife species in Kenya, the Kenya Long-term Exclosure Experiment (Young et al. 1997). But this experiment is hopelessly flawed in being carried out on a set of plots of 4 ha, a postage stamp of habitat relative to large mammal movements and ecosystem processes. But the fact that this particular experiment was not properly designed for the questions it is now being used to address is not a problem if this is political ecology rather than scientific ecology. The overall goal of the Dirzo et al. (2014) paper is admirable, but it is achieved by quoting a whole series of questionable extrapolations given in other papers. The counter-argument in conservation biology has always been that we do not have time to do proper research and we must act now. The consequence is the elevation of expert opinion in conservation science to the realm of truth without going through the proper scientific process.

“Cumulatively, systematic defaunation clearly threatens to fundamentally alter basic ecological functions and is contributing to push us toward global-scale “tipping points” from which we may not be able to return ……. If unchecked, Anthropocene defaunation will become not only a characteristic of the planet’s sixth mass extinction, but also a driver of fundamental global transformations in ecosystem functioning.”

I fear that statements like this are more akin to something like a religion of conservation fundamentalism, while we proclaim to be scientists.