Success rates are similar, but women still get less

NSERC has over the years provided data on request for the Discovery Grant Program for Ecology and Evolution broken down by both gender and different categories of applicants, eg. established, new first renewals etc.  In 2008, I summarized these data for presentation at the Canadian Coalition of Women in Science, Engineering, Trades and Technology (CCWESTT). This can be found as “NSERC Discovery Grant Statistics for males and females 2002 – 2008 at http://ww.ccwestt.org/Home/tabid/36/Default.aspx. That analysis showed a consistent trend for women to receive smaller grants than men with the exception of new applicants in 2007 and 2008 for which grants for women were larger.

Here, I analyze the NSERC data from 2009 and 2013. I show that success rates for grant applications are similar between men and women; however, the trend for women to receive lower grant funding on average continues. 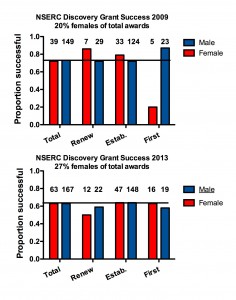 Figure 1 shows that the overall success rate in 2013 is approximately 10% lower than in 2009, the successes of males and females are similar, and the success rate across categories is similar although first renewal success is lower and is lowest for females. Given the importance of this stage for the establishment of the future careers of these applicants this trend is of concern. 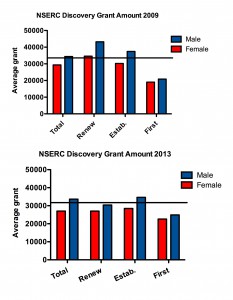 Figure 2 shows that the trend seen in earlier data continues with grants of males being larger than those of females by a substantial amount.  A factor here is that there are no female high fliers who have substantially larger grants than the average, and overall median grants are about the same for males and females. I have not taken accelerator grants into consideration here.

Given that females are on average receiving approximately $6500 less than their male colleagues, it would be interesting to know how this is translated into productivity measured as the number of publications in one year.  For an indication of how publications relate to grant sizes, I selected individuals from the NSERC results for 2013 taking from a range of grant sizes but including those with the largest grants and a sampling from the lower grant sizes.  I then used Web of Science to determine the number of publications for the year 2012-2013 for each chosen individual. 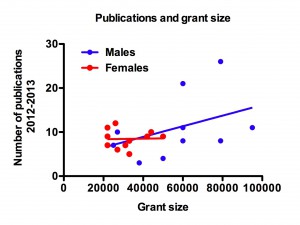 Figure 3. Size of grant awarded in 2013 and number of publications in 2012-2013 for an arbitrary sample of grantees. Neither relationship is significant, but that for males is influenced by the high publication number for two of the male “high fliers”.

The lack of relationship between yearly publication rates and grant size shows that productivity does not relate strongly to funding success. No female received a grant of more than $50 000 in 2013 so the range of the data is less for them.  For males, high publication numbers for two “high fliers” cause a weak upward trend in the relationship of publications to funding, but average publication numbers for four “high fliers” pulls this relationship down.  For these selected data the average number of publications for males was 10.5 and for females 9.1.  Removing the data for “high fliers” in the male data sets results in a slightly higher grant size for males than for females but only 7 publications on average for males compared to 9 for females for similar funding levels. Although this is a small and selected data set, it likely reflects the overall pattern for little relationship between grant size and publication numbers.  Similarly Lortie et al. 2012 (Oikos 121: 1005–1008) found that for the mostly highly-funded North American ecologists and environmental scientists, citations per paper were not related to increased levels of funding although for NSERC funded researchers there was a weak relationship. Fortin and Currie (2013) found that the number of papers, highest times cited, and number of high impact articles were only weakly related to NSERC funding levels for Animal Biology, Chemistry and Ecology and Evolution (PLOS ONE, DOI: 10.1371). Missing from these analyses are the data for individuals who receive no funding.  Thus the reduced proportion of successful renewals in the current funding environment, and the slightly reduced success of first time renewals are not reflected in these evaluations of research productivity. A recent study of global patterns of publications and citations shows that women publish less than men particularly in areas in which research is expensive, they are less likely to participate in international collaborations and are less likely to be first or last authors on papers (Larivière et al. 2013. Nature 504:211 – 213). There are many factors involved here.

We do not have data on HQP numbers, a metric that is heavily weighted in the NSERC Discovery Grant evaluation.  It is likely that the reduced funding level for females results in fewer HQP for them and this could have a strong impact on average funding from NSERC and publication numbers in the future.

In conclusion the new system of Discovery Grant evaluation appears to result in more similar levels of funding across categories but does not remove the bias towards larger grants on average for males. The impact on research productivity of the 37% of applicants that receive no funding as a result of the lower success rate is not easy to evaluate, but data do not support the hypothesis that higher funding for fewer individuals increases Canada’s research productivity.

4 thoughts on “Research funding for women”