Today, published in Molecular Ecology: our paper comparing patterns of genomic differentiation across three hybridizing species pairs of warblers. This paper is the culmination of many years of work by a great group of 10 collaborators. 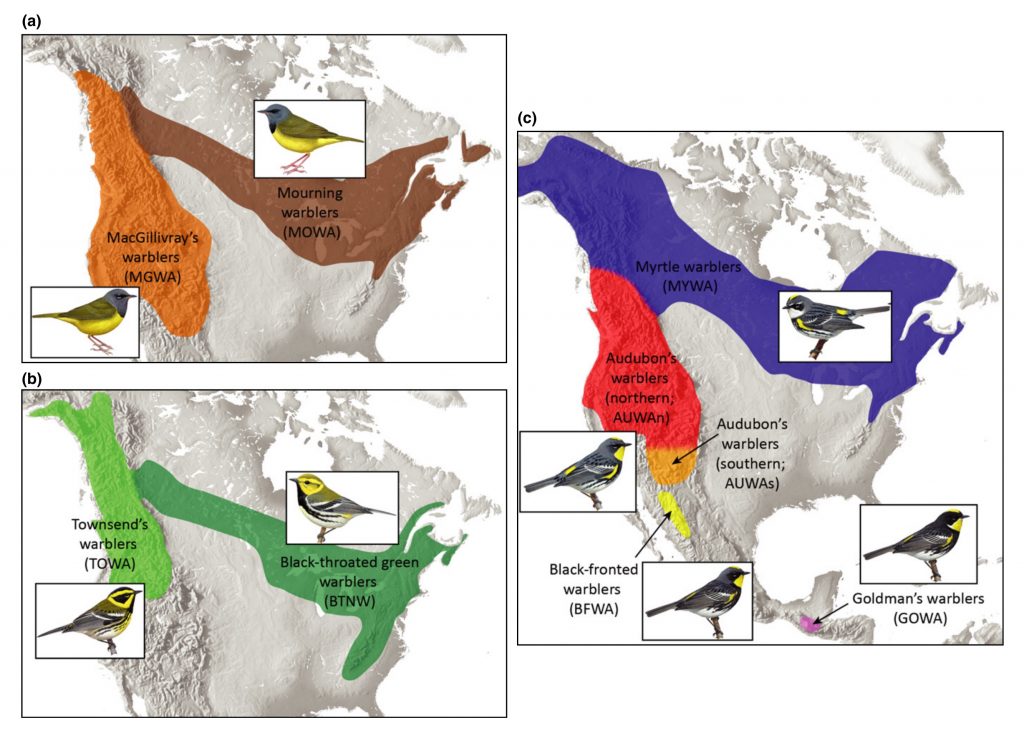 Detailed evaluations of genomic variation between sister species often reveal distinct chromosomal regions of high relative differentiation (i.e., “islands of differentiation” in FST), but there is much debate regarding the causes of this pattern. We briefly review the prominent models of genomic islands of differentiation and compare patterns of genomic differentiation in three closely related pairs of New World warblers with the goal of evaluating support for the four models. Each pair (MacGillivray’s/mourning warblers; Townsend’s/black-throated green warblers; and Audubon’s/myrtle warblers) consists of forms that were likely separated in western and eastern North American refugia during cycles of Pleistocene glaciations and have now come into contact in western Canada, where each forms a narrow hybrid zone. We show strong differences between pairs in their patterns of genomic heterogeneity in FST, suggesting differing selective forces and/or differing genomic responses to similar selective forces among the three pairs. Across most of the genome, levels of within-group nucleotide diversity (πWithin) are almost as large as levels of between-group nucleotide distance (πBetween) within each pair, suggesting recent common ancestry and/or gene flow. In two pairs, a pattern of the FST peaks having low πBetween suggests that selective sweeps spread between geographically differentiated groups, followed by local differentiation. This “sweep-before-differentiation” model is consistent with signatures of gene flow within the yellow-rumped warbler species complex. These findings add to our growing understanding of speciation as a complex process that can involve phases of adaptive introgression among partially differentiated populations.