Welcome to the website of Darren Irwin’s research group. Our research is directed toward understanding how new species arise, how geographical variation within species is produced, and how behaviors evolve. We study carefully chosen model systems using an integrative approach, employing techniques such as genomic analysis, computer-assisted analysis of vocalizations, observation and experimentation in the field, and computer simulation. Research systems have included passerine birds in Asia, Europe, and North America, and salamanders and sea otters of the Pacific Northwest. 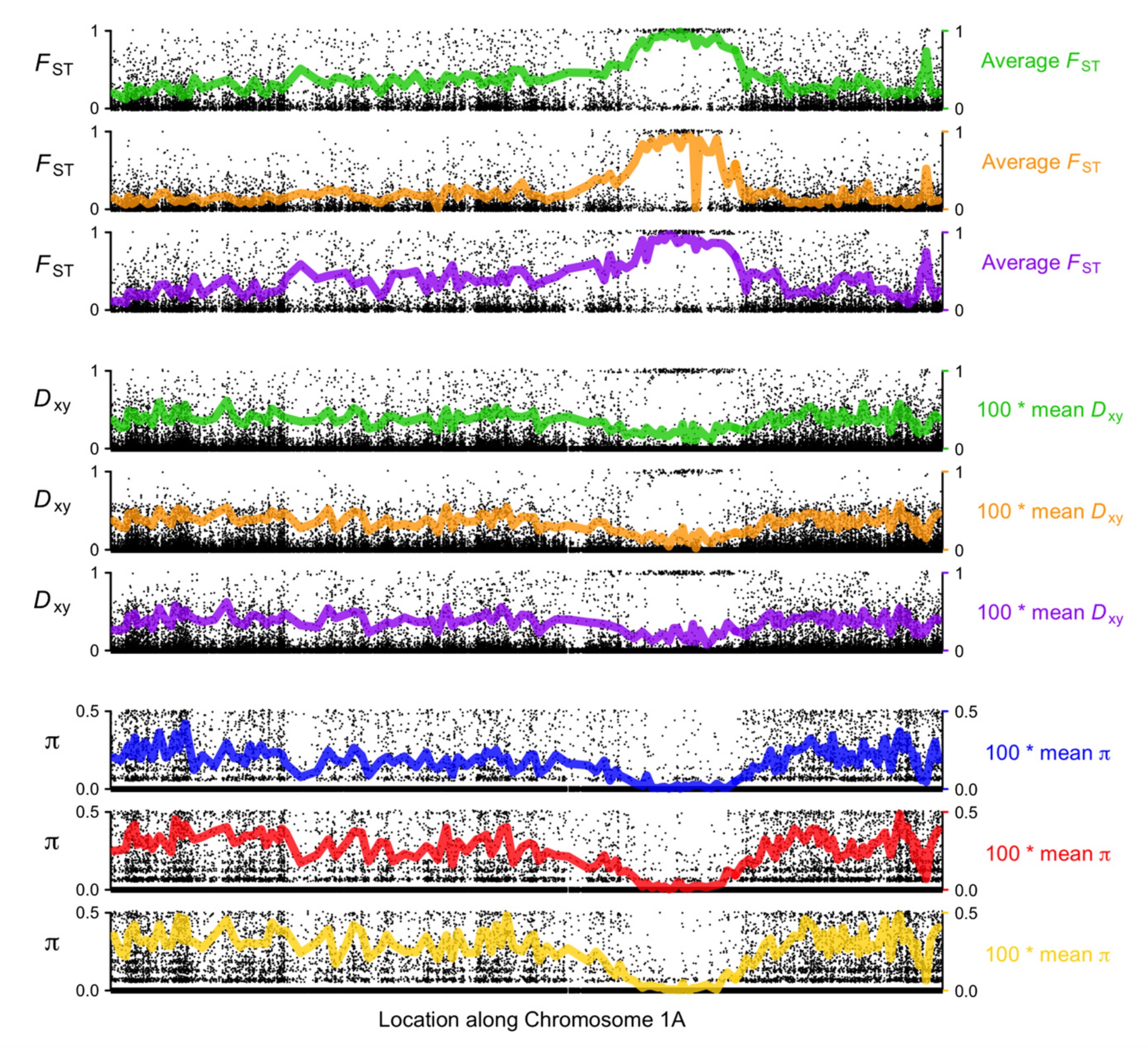 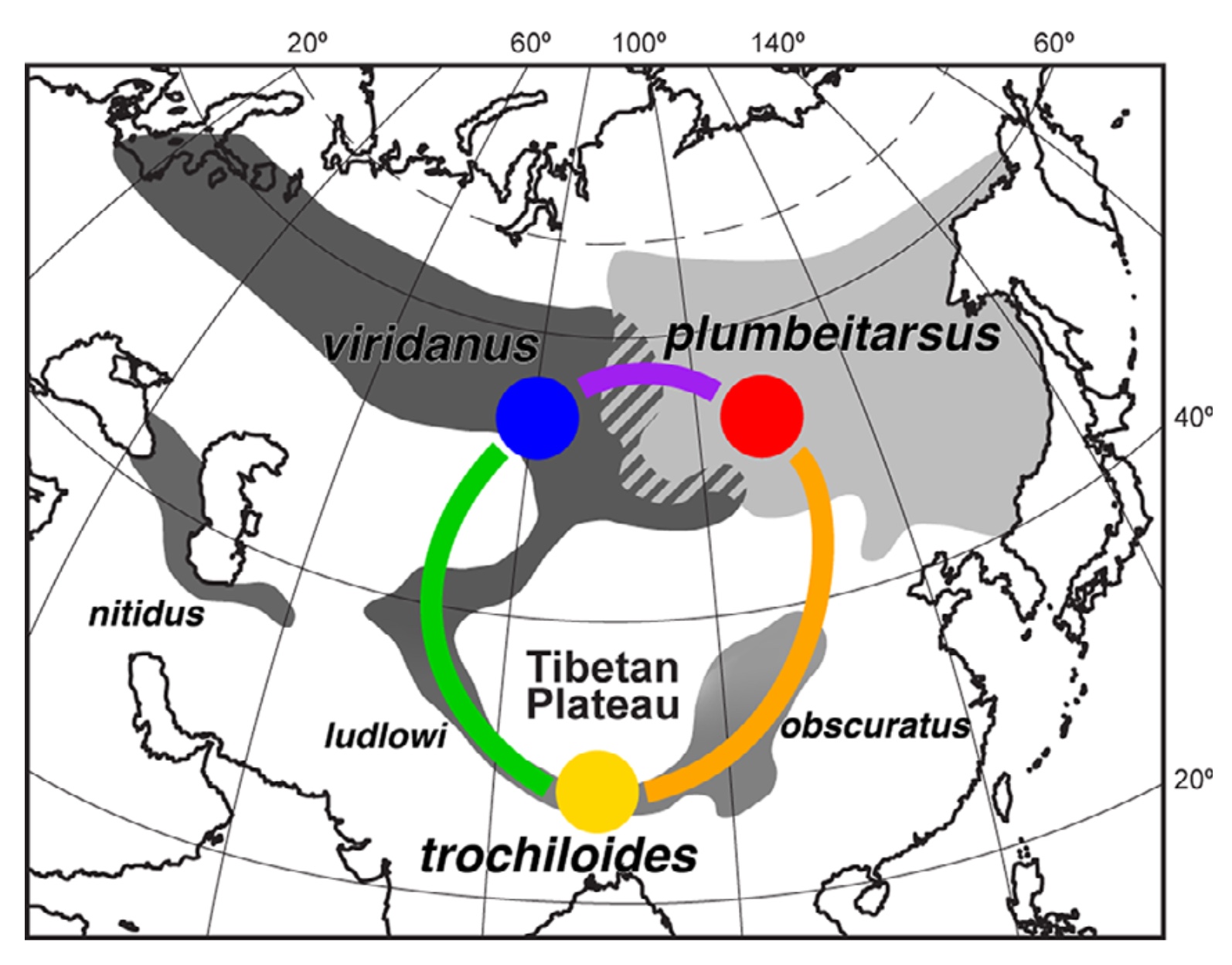 Analyses of genomic differentiation between related species or forms often reveal distinct regions of the genome with much higher relative differentiation (FST) compared to the rest of the genome. There are a variety of theories to explain this pattern, including (1) that the regions contain “speciation genes” that produce partial genetic incompatibilities when heterozygous, preventing gene flow between the forms at that part of the genome, and (2) that there are different alleles that underwent selective sweeps within each population while not in geographic contact. In analyses of Swainson’s thrushes (Link), greenish warblers (Link), and several pairs of North American warblers (Link), we have shown that regions of high relative differentiation usually have low absolute nucleotide distance, leading us to develop a new “sweep­-before­-differentiation” hypothesis: globally favorable mutations may have swept between populations, and these regions have then undergone differentiation.

Hybrid zones and their role in speciation

Related species often interbreed where they come into contact, producing hybrid zones. These zones provide an opportunity to examine the strength of assortative mating, the fitness of hybrids, the amount and pattern of differentiation across the genome, and the genetic basis for traits that differ between the species. Here are a few of the hybrid zones we are studying and comparing to learn about the process of speciation:

Former PhD student Dr. Alan Brelsford (PhD 2010; now Assistant Professor at UC Riverside) studied molecular, phenotypic, and behavioral variation across the hybrid zone between Audubon’s warblers (left) and myrtle warblers (right), two forms of yellow-rumped warblers. He found that the hybrid zone is stable, and that there is some form of selection against hybrids maintaining the zone (PDF). Alan also led a study of genetic variation throughout the entire yellow-rumped warbler complex, showing that the Audubon’s warbler most likely originated through hybrid speciation (PDF and News and Views). Former PhD student Dr. David Toews (PhD 2014; now Assistant Professor at Pennsylvania State University) expanded the scope of our lab’s work on yellow-rumped warblers, examining the association between migratory behaviour and genetic divergence in both the southwestern USA and the Canadian Rockies. More recently, we have mapped the pattern of genomic differentiation across the genome and identified genomic regions underlying plumage differences (Link1, Link2). 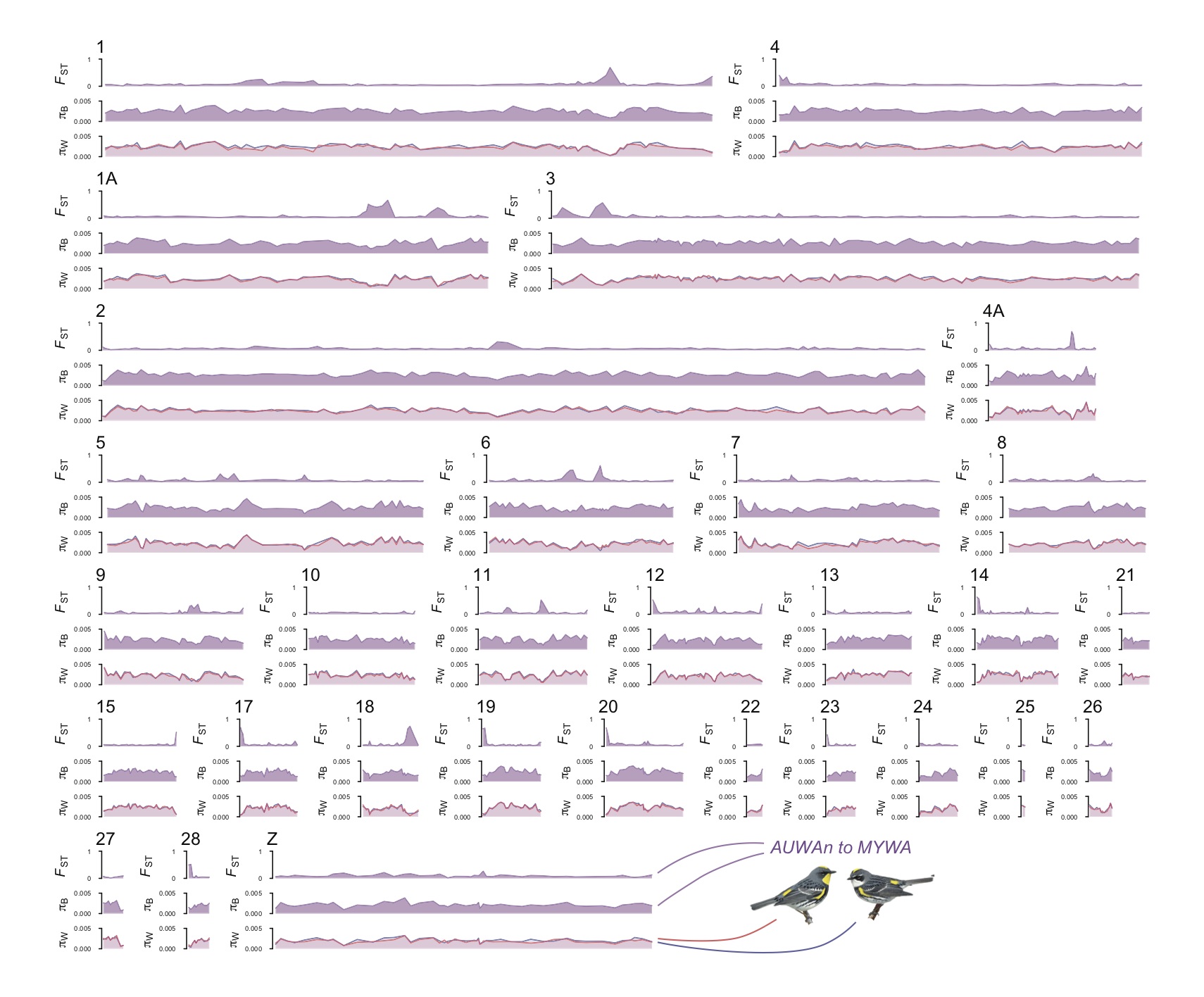 We discovered a hybrid zone between MacGillivray’s and mourning warblers in northeastern British Columbia. At right is a hybrid (a “MacMourning warbler”) identified using molecular markers (PDF).

We have also discovered a hybrid zone between Setophaga townsendi and Setophaga virens (at left is a hybrid) in the same region (PDF). PhD student Silu Wang is now studying the hybrid zone between Setophaga townsendi and Setophaga occidentalis (Link). Madelyn Ore analyzed song and genomic variation of Townsend’s warblers for her MSc research, finding that coastal and inland populations don’t differ as much in these aspects as mtDNA might suggest. 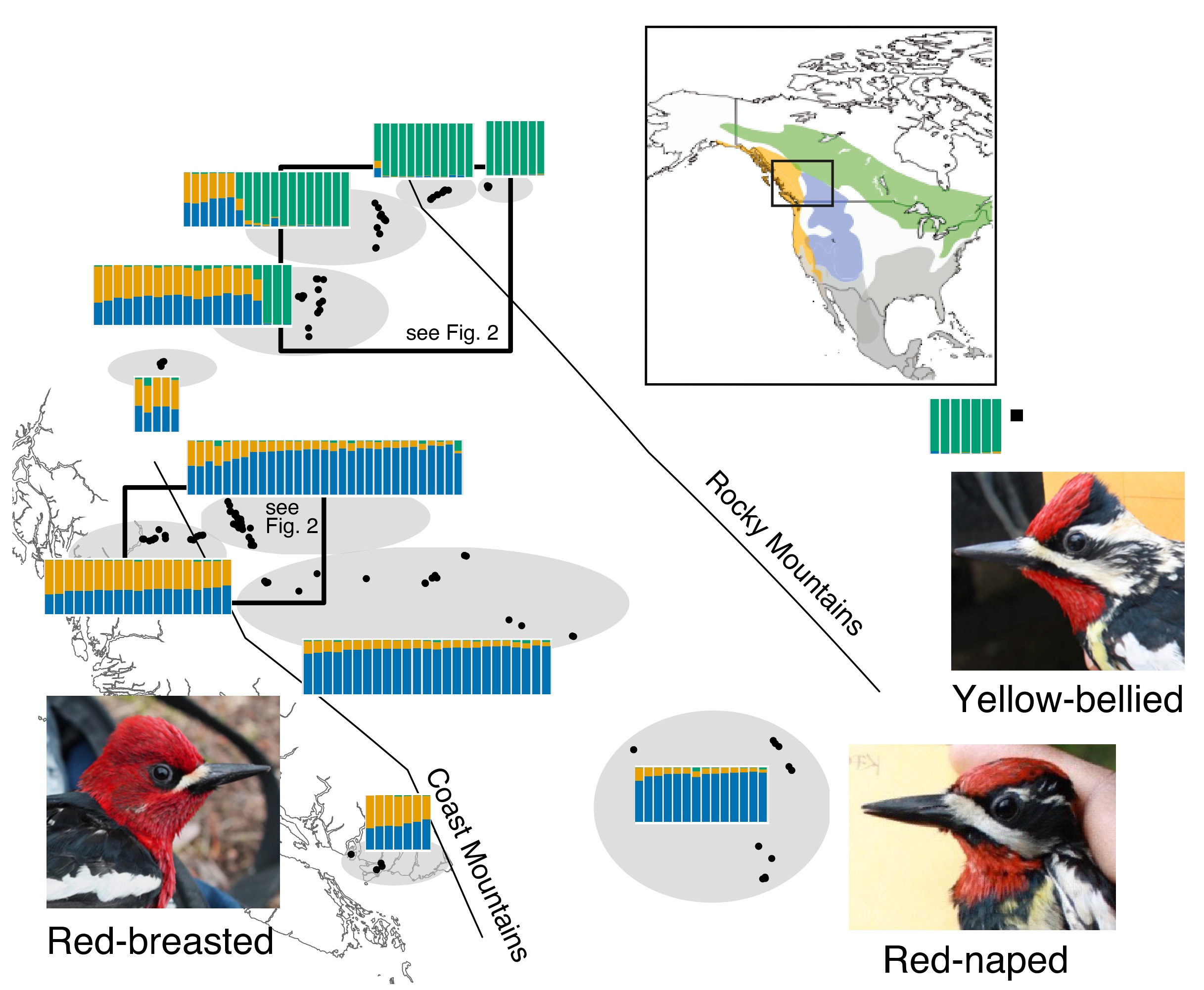 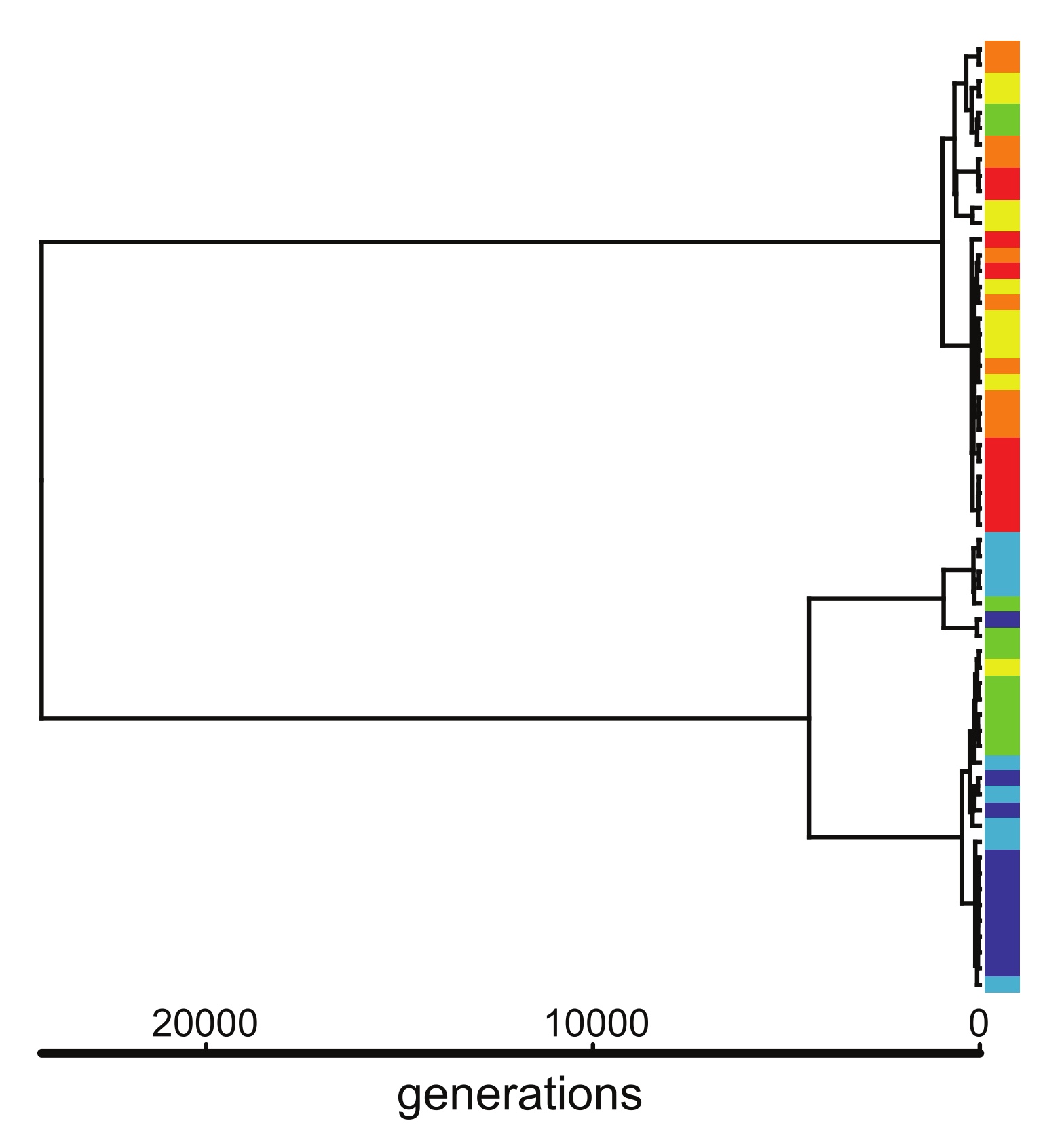 Mitochondrial DNA (mtDNA) is often used in studies of phytogeography, but the patterns in mtDNA and nuclear DNA often differ (a pattern called “cytonuclear discordance”). One possible reason is natural selection: variation in mtDNA is often assumed to be neutral to selection, but given the linked inheritance of mtDNA genes and their vital roles in metabolism it is plausible that selection plays a role. We have published theoretical examinations of why mtDNA can show phytogeographic structure (PDF1, PDF2), and our studies of natural variation in mtDNA have also produced evidence consistent with adaptation of mtDNA (PDF1, Link2, PDF3).

One interesting system in terms of cytonuclear discordance is provided by Yellowhammers and Pine Buntings, two hybridizing species in southern Siberia. Postdoc Dr. Alexander Rubtsov showed that nuclear DNA shows strong differences between the two species, but mtDNA shows virtually no difference, suggesting a selective sweep across the hybrid zone in mtDNA PDF. MSc student Ellen Nikelski is now examining this system in much greater detail, looking at how differentiation is structured across the genome and whether particular genetic combinations are selected against in the hybrid zone. 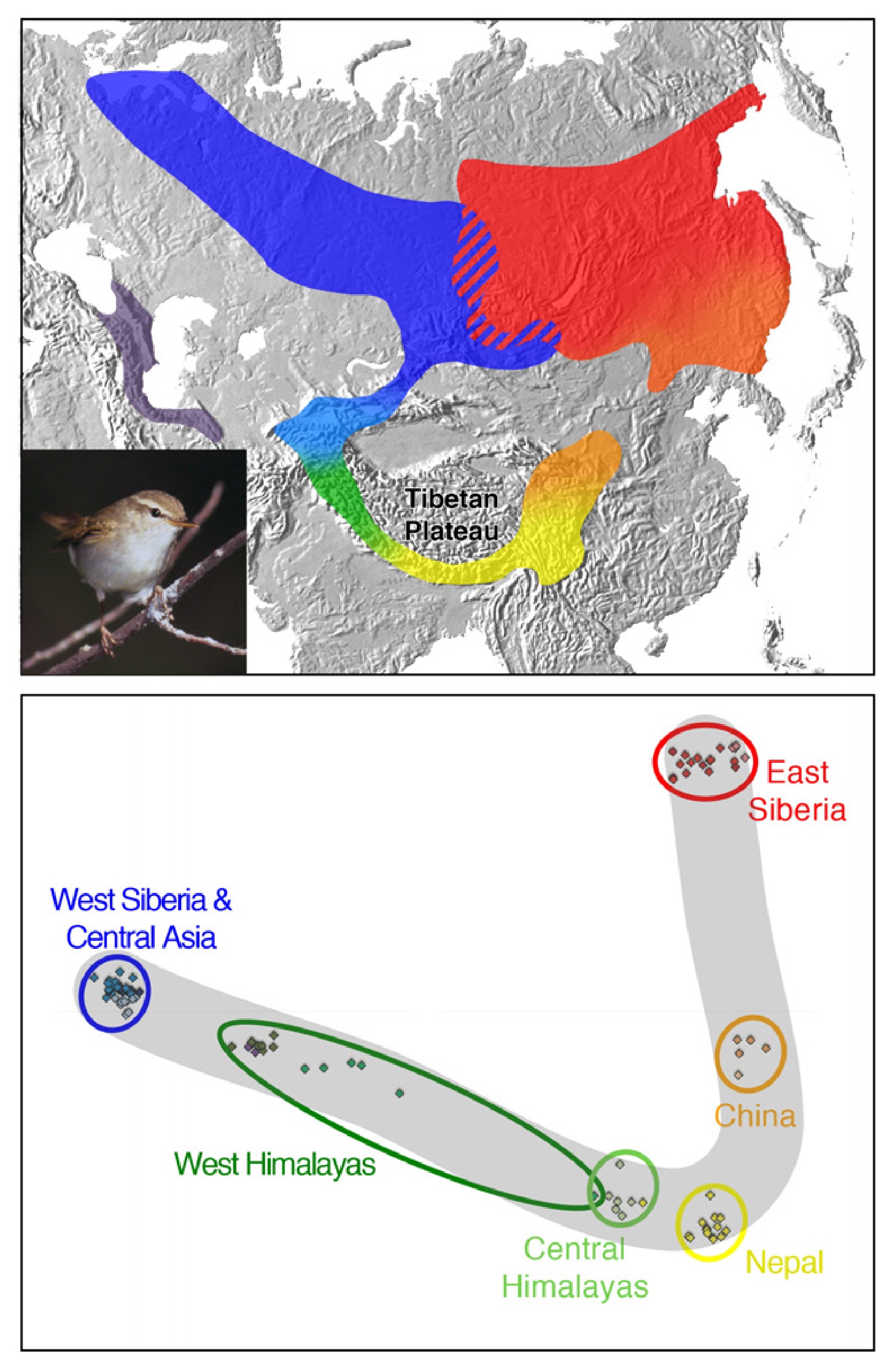 Greenish warblers in Asia show how geographic variation can be used to reconstruct how two species can arise from one. Click here to learn more about this ring species. Collaborators include Trevor Price, Staffan Bensch, Liz Scordato, Jessica Irwin, and Miguel Alcaide. Early work on this system emphasized song and mtDNA variation (PDF1, PDF2). More recently, we have used genomic analysis to clarify patterns of relationships around the ring and to infer the role of introgression and parallel selection in causing islands of differentiation (Link1, Link2).

Starting in the 1960’s, cageÂ-based orientation experiments suggested that there is a genetic basis for seasonal migratory behaviour, generating the prediction that different migratory behaviours might play a role in speciation. Research led by former PhD student Dr. Kira Delmore (PhD 2015; now Assistant Professor at Texas A&M University) has succeeded in performing the most complete test of this hypothesis. Using tracking devices (light-level geolocators) to measure migratory routes, we demonstrated that two forms of Swainson’s thrush on either side of a hybrid zone take very different routes to their wintering grounds (PDF1), with hybrids having intermediate or mixed routes that are likely inferior in terms of both navigation (e.g. mountains) and food ability (e.g. deserts) (Link). We then assembled a Swainson’s thrush genome and conducted genome-wide association analysis demonstrating that a segment of roughly 60 genes on chromosome 4 explains a large percentage of the variation in migratory routes in the hybrid zone (Link). 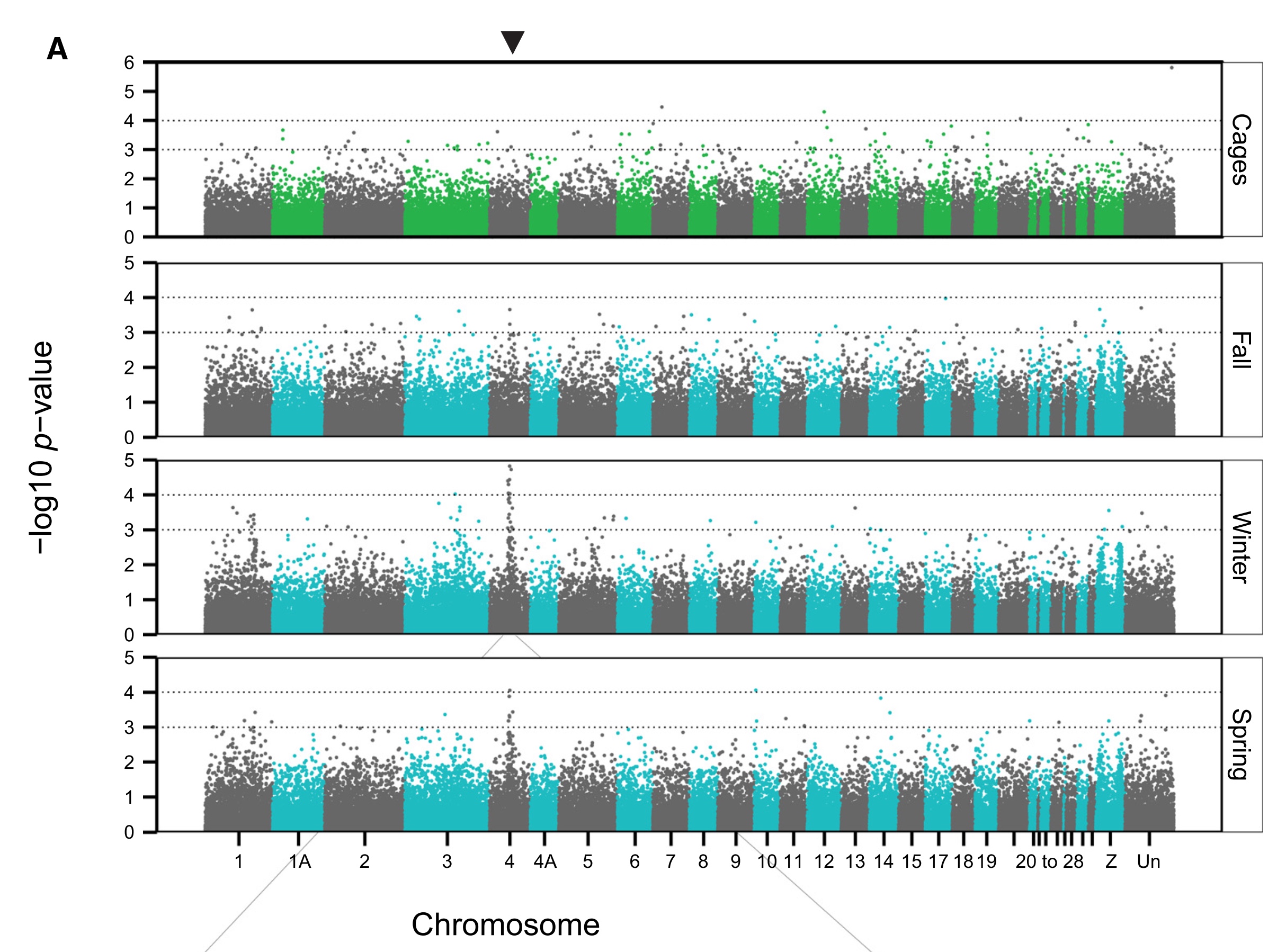 We have also produced a number of literature reviews on the topic of migratory divides, showing that they are common in both Eurasia (PDF) and North America (PDF), and conducted analyses of migratory connectivity and its relation to speciation in Wilson’s warblers (PDF1 and PDF2).

In northeastern British Columbia, near the town of Tumbler Ridge, we have found a contact zone between distinct western and eastern forms of winter wrens. These forms differ dramatically in songs and genetics, and the two forms are reproductively isolated (PDF). Dr. David Toews (who did his M.Sc. on this system) and I proposed that the western form be elevated to species status as the “Pacific wren.” In 2010 the American Ornithologists’ Union officially recognized two distinct species in North America: the Pacific wren (Troglodytes pacificus) and the winter wren (Troglodytes hiemalis), both now distinct from the Eurasian wren (Troglodytes troglodytes). Click here to learn more, and to listen to their songs. We have also contributed to elucidation of cryptic species in Asia (PDF).

Dr. Armando Geraldes and MSc student Kenneth Askelson studied genomic variation in Northern Goshawks and showed that the Haida Gwaii population is a genetically unique population that should be considered critically endangered due to its small population size (link). Kenneth is now a PhD student who is studying genomic variation in White-breasted Nuthatches, goshawks, and several other species groups. 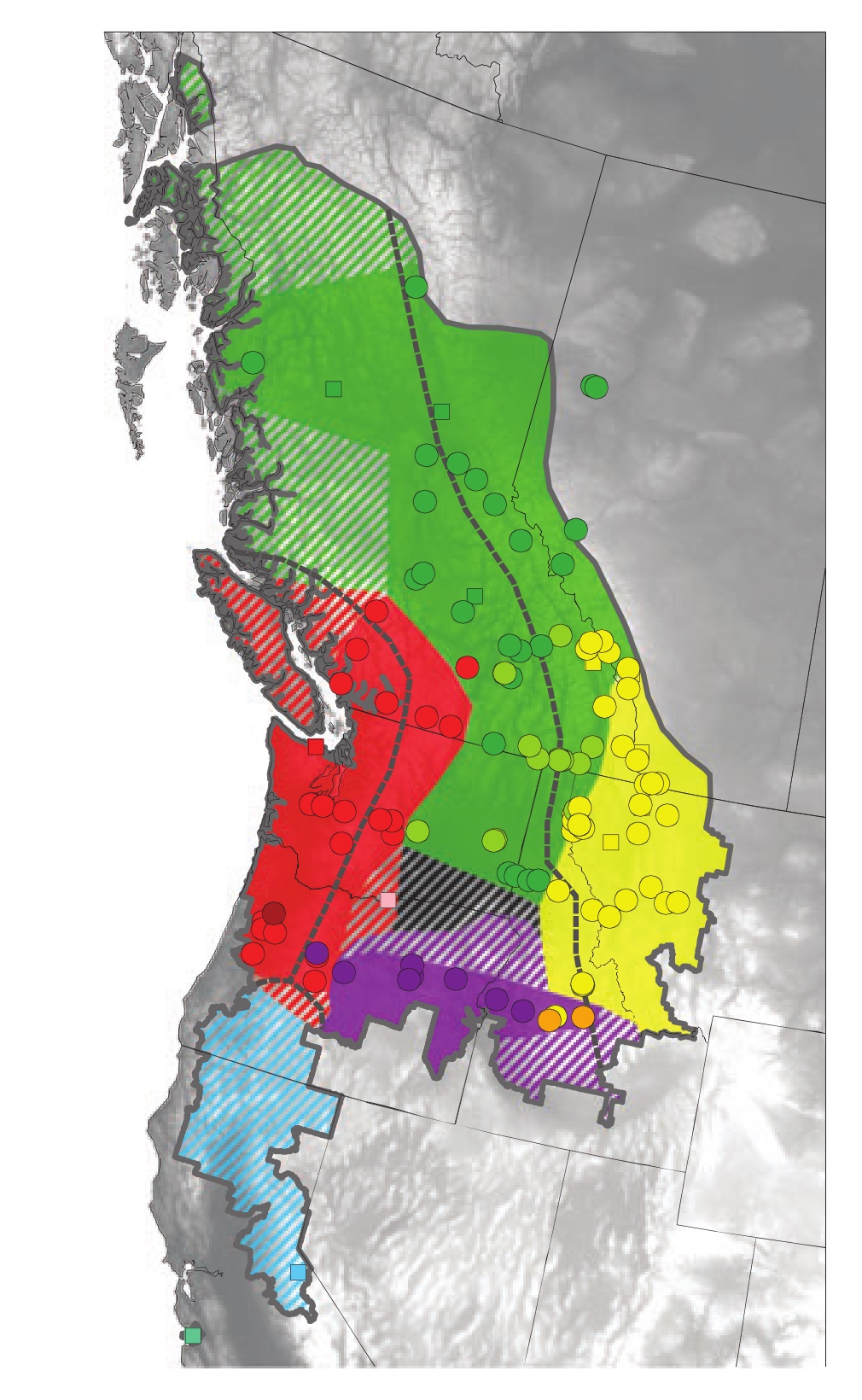 Former PhD student Dr. Julie Lee-Yaw (PhD, 2013; now Assistant Professor at the University of Lethbridge) found that there are a number of cryptic lineages of long-toed salamanders, and these meet in narrow contact zones where there is some mitonuclear discordance (PDF1, Link2, Link3).