Greenish warblers (Phylloscopus trochiloides) inhabit forests across much of northern and central Asia. In central Siberia, two distinct forms of greenish warbler coexist without interbreeding, and therefore these forms can be considered distinct species. The two forms are connected by a long chain of populations encircling the Tibetan Plateau to the south, and traits change gradually through this ring of populations. There is no place where there is an obvious species boundary along the southern side of the ring. Hence the two distinct ‘species’ in Siberia are apparently connected by gene flow. By studying geographic variation in the ring of populations, we can study how speciation has occurred. This unusual situation has been termed a ‘circular overlap’ or ‘ring species’. There are very few known examples of ring species. Above, map of Asia showing the six subspecies of the greenish warbler described by Ticehurst in 1938. The crosshatched blue and red area in central Siberia shows the contact zone between viridanus and plumbeitarsus, which do not interbreed. Colors grade together where Ticehurst described gradual morphological change. The gap in northern China is most likely the result of habitat destruction.

West Siberian greenish warblers (P. t. viridanus) and east Siberian greenish warblers (P. t. plumbeitarsus) differ subtly in their plumage patterns, most notably in their wing bars, which are used in communication. While viridanus has a single wing bar, plumbeitarsus has two. Around the southern side of the ring, plumage patterns change gradually.

Male greenish warblers are very active singers, using song both to attract females and to defend their territories. Each male has a repertoire of song units, and songs are made by stringing together units in various ways. There is much geographical variation in both the song units and the rules by which units are assembled into songs. The figure below illustrates spectrograms of example songs from eight locations around the ring.

To hear a song, click on a spectrogram in the figure below! 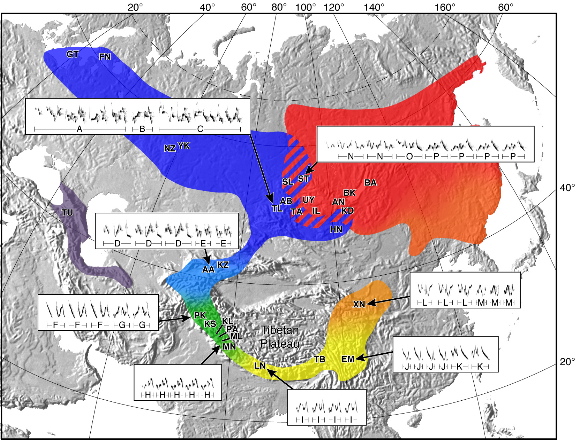 There is a clear gradient in song characteristics around the ring, with the northern forms viridanus and plumbeitarsus differing dramatically in their songs. By measuring song spectrograms from various populations and doing a statistical analysis to illustrate the variation, we produced the following figure. Above, songs differ distinctly between viridanus (in blue) and plumbeitarsus (in red) but change gradually around the southern side of the ring. Songs are simple in the south and become more complex northward, in two distinct ways.

It is relatively easy to hear the song differences in the field, and playback experiments have shown that the birds distinguish between types of songs. A male greenish warbler will aggressively respond to songs that it recognizes as belonging to its own species, intending to chase an intruding male out of its territory, but it usually will not respond to song from a distantly related population. Females probably also use the song differences to distinguish among potential mates. Genetic data show a pattern very similar to the pattern of variation in plumage and songs. The two northern forms viridanus and plumbeitarsus are highly distinct genetically, but there is a gradient in genetic characteristics through the southern ring of populations. All of these patterns are consistent with the hypothesis, first proposed by Ticehurst (1938), that greenish warblers were once confined to the southern portion of their range and then expanded northward along two pathways, evolving differences as they moved north. When the two expanding fronts met in central Siberia, they were different enough that they do not interbreed. To read more about greenish warblers and ring species, see the following: