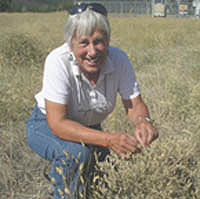 I am a professor emerita in the Biodiversity Centre at UBC.  I study population cycles of western tent caterpillars and in particular I am interested in the dynamics of viral disease as a factor influencing the populations.  I also study the biological control of weeds.  We have been monitoring the biological control of knapweed since 1976 and have observed the successful control associated with the introduction of the weevil, Larinus minutus.

Judith Myers – My career has been serendipitous. My first experience in ecology came from the luck of getting a scholarship to do a marine ecology course at Woods Hole Laboratories (Mary Jane West-Eberhard was my room mate there). Next I went to Trinidad and to study butterfly courtship because I babysat the son of famous biologists Lincoln and Jane Brower. This led to a M.Sc. degree at Tufts University and the discovery of a gregarine parasite of monarch butterflies, part of the story in this article. When a certain famous biologist told me that women don’t use their Ph.D’s but just get married and have babies, I decided to move to another project for my Ph.D. At Indiana University. I worked on with Charles Krebs, who has continued as a mentor through my career. Here I became fascinated with population cycles, another part of the following article. A Miller Postdoc at Berkeley in 1970-72 allowed me to see political unrest up close following the bombing of Cambodia, including the smell of tear gas. In 1972 universities were much more interested in hiring women than they had been in 1970. I chose a position at UBC and went from working on small mammals back to working with plants and insects. As it happened Jamie Smith was hired by the Zoology Department the next year. He was single, I was single; who could believe. Our first sabbatical to Australia resulted in an additional project; we had a daughter Isla (now a Chancellor’s Fellow at Edinburgh University and doing her research in Arctic and alpine areas in the Yukon). Our son was born three years later and I was the first woman in the Faculty of Science to take maternity leave. In 1986-87 Jamie and I went to Oxford on sabbatical leave. It was easy for Jamie to arrange a connection there as that is where he had done his D.Phil. But Sir Richard Southwood, the head of the Zoology Department at the time, told me there was no office space although I could “sit on my husband’s knee”. This resulted in my hanging out at the nearby NERC Institute of Virology where Jenny Cory taught me about insect viruses. We have collaborated ever since. In the early 1990s I became an Associate Dean in the Faculty of Science to promote women. I fought for mentoring, policies for hiring that were more likely to include women, and spoke out at promotion and tenure meetings when the records of women were being judged on a different standard than men; “she hasn’t done enough yet or it is all her advisor’s work.” My recommendations to young women are: Don’t readily take “no” for an answer, hire a cleaning person as soon as you can, marry someone as smart or smarter than yourself who can cook, don’t be afraid to wait until after you get tenure to have children, enjoy what you do and keep smiling.