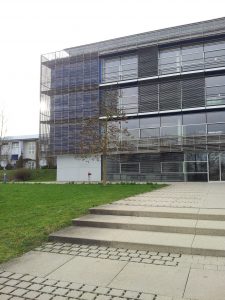 Thanks to a grant from microMORPH Research Coordination Network, I’ve come to Germany for a month, to the Max Planck Institute for Developmental Biology in Tübingen, to learn a whole bunch of brand new things from all the really smart and, dare I say, hardcore, scientists here. With the great help of my collaborators, I’ll be treading into new floral and fruit developmental biology waters. It turns out one of my weeds, Chorispora tenella, is a bit of a beautiful weirdo among the Mustard family (Brassicaceae). I am also learning how the most precious historical samples are handled for genomic analyses, much of which I will apply to my own historic samples of Chorispora. Hint: clean rooms and bunny suits are involved.

In November 2015, I joined the labs of Dr. Ruth Hufbauer and Dr. John McKay at Colorado State University as an NSF Postdoctoral Fellow in Biology to work on a shiny new project. I couldn’t be more excited about it, y’all.

Biological invasions of non-native plant species present compelling motivation to understand how human-induced changes in the environment and species distributions influence ecological and evolutionary processes. Their documented geographic spread across time makes them ideal for study using historic collections, allowing better insight into evolutionary change over short time scales. Applying advanced genomic approaches to historic samples is key to understanding the processes that allow plants to rapidly establish and adapt to new environments. Theory predicts that dramatic ecological and evolutionary changes affect invasive species soon upon arrival in a new habitat. Yet current research relies on sampling contemporary populations, and therefore reveals little about the initial stages of invasion. The fellowship research is a study of the history of an invasive weed by exploiting an untapped historical resource to observe “snapshots” of the initial stages of invasion and the genetic changes that occur as a plant species spreads. It involves sampling genetic material from dried plant specimens collected throughout the course of an invasion, from herbarium collections across North America, including the New York Botanical Garden, the University of Kansas, the California Academy of Sciences, the University of British Columbia, Colorado State University, and others. I will use techniques for ancient DNA originally developed to study long extinct organisms such as mammoths and Neanderthals to study evolution over the course of the 100 year invasion of North America by crossflower (Chorispora tenella, Brassicaceae), a widespread and governmentally listed noxious invasive weed.

Hooray! I successfully defended my PhD on July 6, 2015. What a relief!

In the fall I  will be joining the labs of Drs. Ruth Hufbauer and John McKay at Colorado State University to begin an exciting new project, investigating the history of invasive
plant populations by exploiting an untapped historical resource that allows us observe the
initial stages of invasion and the genetic changes that occur as the species spreads. More on this soon!

What ecological conditions or evolutionary changes are necessary for a species to transition from “introduced” to “invasive”? Plant species are constantly being transported to new habitats, largely through human activity, but only some species manage to establish self-sustaining populations, and only relatively few pose serious threats to their new habitats. My doctoral work addresses this fundamental question by examining possible mechanisms underlying the evolution of invasiveness using one of North America’s worst weeds, diffuse knapweed (Centaurea diffusa), as a model. If we can identify genetic changes associated with invasiveness, then we can better predict which plants pose the most threat, and better target prevention and mitigation efforts.

Please see my Research Interests page for descriptions of ongoing projects and possible collaborations. I am currently a Ph.D. candidate in the Department of Botany at the University of British Columbia in Vancouver, BC. I am also a member of the Rieseberg Lab and the Biodiversity Research Centre. I am currently seeking a post doc position to begin as early as Spring 2015. Please feel free to contact me if you know of any exciting prospects!

I’ve worked most extensively with species from the Sunflower family (Asteraceae), such as high-throughput genotyping looking for selective sweeps in a hybrid sunflower species, adaptive radiation of seed oils in common sunflower, and my current work on the evolution of invasiveness in diffuse knapweed (Centaurea diffusa).  But my previous experience has been cosmopolitan, including the study of intron splicing in baker’s yeast mitochondria (Saccharomyces cerevisiae), population studies of New World warblers and vireos in central Texas, management of invasive salt cedar (Tamarix spp., Tamaricaceae), gravitropism in the triangle water fern (Ceratopteris richardii, Ceratopteridaceae), and the phylogenetics and evolution of a member of the mint family (Lamiaceae) on the Canary Islands.